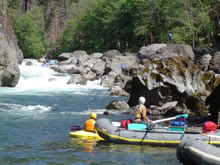 In a past life I use to love to go whitewater rafting. You might even say that I was a rafting junkie. The year before I got married I went rafting every weekend that year, except for two. I even spent my vacation time on a river somewhere. I've been on rivers in OR, WA, ID, MT, UT, CA, and Canada.

After I got married I slowed down the rafting thing and only went sometimes in the spring run off when the water was flowing. In the spring of '98 I sort of gave up rafting due to a little issue on the Illinois river in Southern Oregon.

It started out like any other great trip, the weather was not so good as to draw a lot of people to the river, but not bad enough to keep us off the river. We put on the river on Saturday and the water level was perfect at 2000 CFS. CFS stand for "Cubic Feet Per Second" which means the amount of water to pass a given spot in one second and any given time. Any whoo, we put on the river and ran the top half of the river and had a great time. It started to rain Saturday night and that is when all hell broke loose. We got up early on Sunday and the river had come up about 12 feet in height. We set off as soon as we could break camp, skipping a formal breakfast just so that we could get moving. Later that morning we came to the Green Wall and stopped to scout the rapid. The Green Wall is a Class 4+ on good days and a Class 5 on most. To our surprise, the 4-5' drop at the top of the rapid was a 20'+ hole. Today the rapid was a Class 6. We debated our options and decide to run the rapid and continue on as we were not in a good place to stop as we were already tied up in the trees and did not know how much higher the water would go. The first boat through was my buddy in his 16.5' boat, he disappeared in the hole and then came up the down river side and was thrown in the air and the boat flipped dumping both fuzz ball and his passenger in the river.

I was next to go down the river in my little 14' cat boat. My boat was a nice little play boat that was good in big water. I went into the hole and came out the other side and kept going down the river. I saw no signs of the first boat or the passengers. I went down river about a 1/2 mile when a rogue wave hit me from the side and flipped my boat. I then body floated about another 1/2-3/4 mile of class 4 and 5 rapids being bounced off of rocks and the bottom of the river. I managed to cling to a rock in the middle of the rive for a sort time to catch my breath and try to determine out what to do next. I finally made it to the bank and passed out, I woke up when I started to puke more water than you can imagine. It was also at this time that I saw the third boat in our group to by and flip in a small hole just up river from where I was located. I went up river and found fuzz ball and his passenger coming down river to find anyone else that was around. The three of us spent Sunday night on the bank of the river in a torrential down pour of rain in freezing cold weather.

On Monday we were found by the US Coast Guard and received a nice little flight in their helicopter. I have been around planes all of my life and I have never seen better pilots than the two pilots of the helicopters that day. I can never say enough about the US Coast Guard. It was also at this point when we found out that one of our party did not make it out.

Gale was a very nice man that went out doing what he loved. Even after all of this time, I still think about him.

The river went from 2000 CFS on Saturday to over 30,000 CFS on Monday. We ran the Green Wall somewhere around the 25,000 mark. Just for a point of reference, the river is considered navigable above 7,000 CFS. A total of two people lost their lives that weekend. I gave up rafting that weekend. When you have children you need to take responsibility for them and put them first. You do not have the right to do things that might leave you kids without a parent. I did go back to rafting only in the summer months and on new years day. And only on small rivers, Class 3 or smaller rapids.

I was on NBC Dateline, Weather Channel's Storm Warning, and featured in many newspapers around the Northwest. Somehow, it was just not worth it.

Thank you to my DW who helped me through it all and still kept me around. 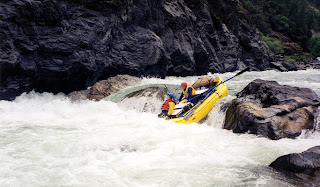 The hole in the Green Wall, Illinois river.

Kelsgarden said…
uh, WC, it made international news - my parents called from Mexico - college friends called from the east coast -

Finally caught a glimpse of you on the news!

I am just keeping you around because I haven't got even yet . . . .

Maraya was 4 years old & Elleah was 2 at the time - just this year Maraya did a project on natural disasters in science and used this incident for her research -
2:49 AM

October 01, 2006
I have been blessed with being able to drive some of the most unbelievable roads ever paved. Last week I found myself on HWY 108 in Central California. 130 Miles 26% grade 9624 at the summit 4 hours to drive this route This photo is looking west just down from the summit. I could live here with the wild cows. A lone wild cow at the 9000 foot level just making sure that nobody is speeding along.
16 comments
Read more

September 04, 2006
So, here I am working in the big city of Milton just out side of Toronto, ON. I'm giving a rousing little 7 hour training session on stuff. Next stop, Starbucks via southern California.
12 comments
Read more