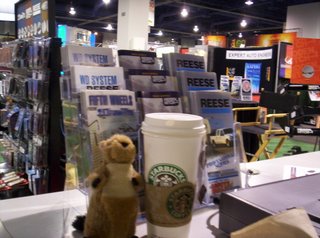 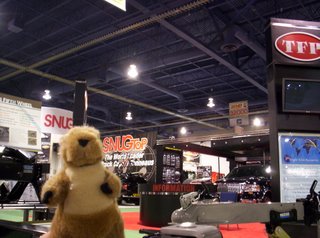 There was a Starbucks not to far from the booth, but what is up with the price of everything almost double what it is at a normal Starbucks? And when I tried to order a Venti Americano in a Tall cup, the guy just gave me that "I'm soooo confused" look. So I tried to order it in more simple terms, "four shots with just a little water for color". This just made matters worse. In the end I just received a Venti. I as a rule don't like the Venti as it's as tall as I am and makes it hard to drink.

And in support of the glorious Hamster, please go vote for him and his new World Order at the Ellen Degeneres web site.

As the TKW says "Vote now and Vote often"

Me said…
You mean double the already double price they charge for things?

Anonymous said…
I really don't understand how Starbucks continues to grow. They have a good product, but thier prices are top of the market and their serivice is marginal to terrible. Double the price and I'd be with Merit looking for water.

gemmak said…
Lol....I notice your link to 'Goodwood'......damn place, took me 5 hours to get home at night a few weeks back courtesy of a traffic jam as the festival of speed turned out to get home....those cars may be beautiful but some of them sure don't run on the road too well! ;o)
1:40 AM

Anonymous said…
oh, GammaK now you are taunting the poor WC - he would find 5 hours stuck in traffic with "those" cars a religious experience LOL!

On the road again.

June 06, 2008
Since taking a new position this spring, I have enjoyed the lack of travel that came with the change flow of life. However, all good things seem short lived as I must now start traveling again on a somewhat regular basis's. The travel will be one to two nights a week during the summer months and then I can go back to less travel come the winter months when sales slow down and customers don't want to see me as much. And due to the lack of a computer to travel with, up loading pictures will come at less regular intervals for present time. And just for the record...I flipp'in snowed on me Wednesday....Snow in June. I have pictures to prove it. Stay tuned.
5 comments
Read more

On the topic of kids

April 30, 2008
And we are obviously buying less and conscious of all our choices - escaping the consumerism of elaborate do-it-yourself decor and prepared cuisine, the soccer mom mystique, and the bored, lazy, 'gimme' kids. Sometimes a quote comes along that really fits the way you think and live. This is one of those quotes, and the best part is that it comes from my DW. When you spoil you kids with love and a learning environment, no problem. I do believe that some parents do really take care of their kids and teach them to be strong non-whining adults that work to support themselves and intern teach the next generation to do the same. Then there is the rest of the parents that are raising whining think that they deserve everything but don't want to work for it spoiled brats that will complain about the government full time, but are the first ones there with their hands out and still think the should get more.... assbites! Then again some people complain about the way we raise our k
7 comments
Read more