Why you should always have a cold one around.. 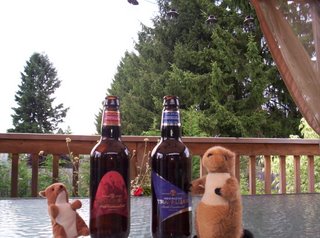 You just never know who might show up for a nice pint of ale.

Might I suggest a Trafalgar India Pale Ale or Waterloo bottle conditioned ale from Freeminer Brewery in the United Kingdom.

Very old world style of ales, all I can say is "long live the Brits"

Both ales are imported by the Rogue Brewery in Newport, Oregon.

I only bring out the best for Squirrel and any other furry rodent that should stop by. 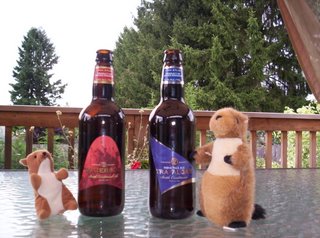 WickedHamster...I know it's hot out since we all wear fur coats, but I have the badminton net up and ales on ice ready for that little get together in the backyard. Throw some shavings down on the deck and sleep under the stars. We can get Mr. and Mrs. Squirrel to come on down and fire up the pit for some Hobo dinners and we are set. On the s'mores thing, dark chocolate or milk chocolate?

Kelsgarden said…
this is so wrong

Anonymous said…
Blogging after a couple of ales I see!
Dark chocolate . . .

Anonymous said…
Yep, dark. People have been laying traps for me for years - unsuccessfully. You have to get up pretty late in the afternoon to pull something over the mighty hamsterbrain!
8:50 AM

Anonymous said…
Ale good...(Burp) Smores good too... (Burp) Do you have any Dark with Hazelnuts? Or some Rogue Nut Brown?

On the road again.

June 06, 2008
Since taking a new position this spring, I have enjoyed the lack of travel that came with the change flow of life. However, all good things seem short lived as I must now start traveling again on a somewhat regular basis's. The travel will be one to two nights a week during the summer months and then I can go back to less travel come the winter months when sales slow down and customers don't want to see me as much. And due to the lack of a computer to travel with, up loading pictures will come at less regular intervals for present time. And just for the record...I flipp'in snowed on me Wednesday....Snow in June. I have pictures to prove it. Stay tuned.
5 comments
Read more

On the topic of kids

April 30, 2008
And we are obviously buying less and conscious of all our choices - escaping the consumerism of elaborate do-it-yourself decor and prepared cuisine, the soccer mom mystique, and the bored, lazy, 'gimme' kids. Sometimes a quote comes along that really fits the way you think and live. This is one of those quotes, and the best part is that it comes from my DW. When you spoil you kids with love and a learning environment, no problem. I do believe that some parents do really take care of their kids and teach them to be strong non-whining adults that work to support themselves and intern teach the next generation to do the same. Then there is the rest of the parents that are raising whining think that they deserve everything but don't want to work for it spoiled brats that will complain about the government full time, but are the first ones there with their hands out and still think the should get more.... assbites! Then again some people complain about the way we raise our k
7 comments
Read more